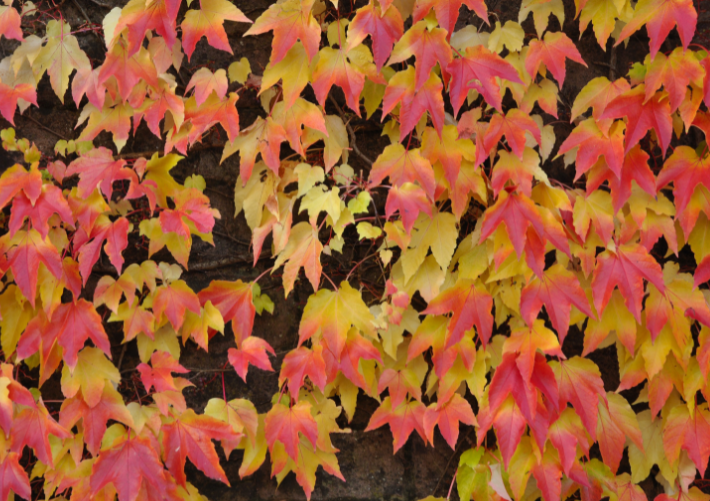 Vines are an essential part of our garden. Our neighbor’s grapevine grows over the fence, and unnamed vines send their tendrils up the stems of the wild rose. However, the star climber is the Virginia creeper on the west wall of our house.

Virginia creeper is one of our most common climbing plants. Under favorable conditions in the wild, it grows to 20 meters or more, but it also does very well in dappled sunlight or partial shade on the side of houses and fences.

Virginia creeper sends out multiple vines, using tendrils with sucking disks to anchor them to surfaces. It boasts a lush, green tangle in the summer and lovely reddish leaves in fall that have made it a good garden plant.

Unlike many garden plants, this is a native Canadian, first introduced to England by the Tradescants in the 17th century and now a favorite among gardeners worldwide.

Fifteen years ago, our creeper was a young plant that reached barely three meters up the side of the house.

We worried about the strong tendrils’ potential damage to bricks and mortar but left it alone because it added some green in the driveway.

Each year the creeper grew, suffering in winter the heavy icicles that would hang from its upper branches and pull the tendrils away from the brick, surviving in summer the occasional tug from overzealous children pretending to be Tarzan.

When vines were pulled down, they would wither and die and had to be cut off. No amount of tying them back into position would do.

The creeper eventually grew to the eaves. It sent out vigorous vines along the soffit and developed the hydro cable. It reached around to the back of the house and started along the roofline.

The creeper became an essential part of our landscape. As soon as the leaves came on in spring, our local colony of house sparrows would move in and use it as their roost, chattering away in the evening and waking us in the morning.

In summer, the creeper grew over our windows, providing heavy shade from the intense afternoon sun. Last summer, a lone female sparrow roosted every night on top of the half screen in the bathroom window. We had to adjust the blind to avoid frightening her away.

Another summer, we discovered four giant caterpillars, about five centimeters in length, on the lower branches of the vine. The discovery sent us scrambling to our field guide to identify them as abbot’s sphinx moth.

We never saw the adults, but they are reputed to have massive bodies and a wingspan of about seven cm.

This year, we had the house painted. This forced us to remove the vines attached to the soffit. Working from a ladder six meters above ground made cutting the vine back very difficult. We opted for pulling the vines back from the soffit.

This was a mistake. We drove into the driveway to find it a meter deep in Virginia creeper the next day. All those cut vines, unattached by their suckers to a surface, had made the plant top-heavy and pulled it off the wall.

Since the vines die without the tendrils to support them, we were forced to cut our beloved climber back to the ground.

It’s hard to describe our sense of loss. Instead of thick, green leaves, chattering sparrows, and buzzing insects, we have a barren brick wall covered with white bird droppings.

We only hope that our Virginia creeper may once again spread its thick cover over our west wall in the next few years.

As gorgeous as the photo can be of Virginia creeper soaring over venerable buildings, creating a beautiful dense green mass of leaves in the summer, and a flash of red in autumn the effort for achieving this image is difficult and labor-intensive for a lot of gardeners.

In reality, the damage caused by leafhoppers is widespread and frequent as well as the best pesticides to control the problem are not permitted for home use.

To be able to recognize the threat To understand the threat, first know the pest. Leafhoppers are tiny insects that are wedge-shaped with bodies.

When the leaves fall, the adult leafhoppers seek out spots to ride through the winter months, and the older leaf debris that has dropped to the ground in front of your Virginia creeper will be perfect.

Adult leafhoppers awake from their sleepy state the spring that follows and females begin cutting off young growth and putting their eggs into tender twigs as well as freshly emerging leaves.

As the young nymphs emerge they feed by inserting their mouthparts shaped like knives which are referred to as stylets, into the leaf tissue and removing the sap.

In case you’re trying to figure out why leaves appear to be scorched rather than consumed, it’s because leafhoppers are’mesophyll’ feeders which mean that they consume only the cell layer that is higher up on leaves.

This is the leafhopper’s plan of attack But what’s ours? You could debate on both sides of the debate about pesticides endlessly, but the battle has already been fought and been won.

What can we do to get it all? Nothing.

We can reconsider the issue and start from the beginning.

If you’ve had problems with your leafhopper in the past, get an insect control program right now.

Remove the debris of leaves from the bottom of your Virginia creeper before snow begins to fall; it can reduce the number of winter visitors. Then, if you haven’t yet given your plants a thorough soak.

The next year, ensure that you keep your plants properly watered through the summer. Dry-stressed plants are more vulnerable to leafhoppers and are severely affected if they are attacked.

There are approved pesticides. However, it is important to apply them at the right time.

Begin with insecticidal soap when leaves begin to appear and continue throughout the summer months with treatments every seven to ten days. Some products are more effective than soap, however, generally, you should start with the simplest control and observe the outcomes.

If the soap doesn’t work, look for a more powerful control such as Ambush because the timing of its application isn’t quite as crucial as it kills adult leafhoppers as well.

The way we deal with issues isn’t easy, however, we might have gotten caught up in the easy way for too long with the use of pesticides. Environmental issues are only going to get more complex and when you are relying on the simple and quick, you do not look for more efficient solutions.

It’s time to tackle. The balance between protecting the environment while also manipulating it to meet our needs isn’t easy and neither will gaze at a landscape that is devoid of the perennials we love.