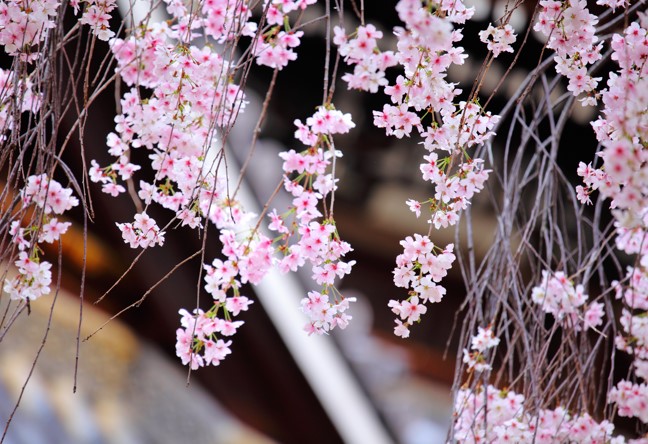 Some people shorten the whip-like branches because of space constraints or personal taste, making the effect more compact, like a mushroom.

Weeping cherries are said to have twice as many issues because each tree is essentially two in one, according to a running joke.

We are referring to the two components that each weeping cherry tree has. The roots and trunk, which nurserymen refer to as “rootstock,” are actually a single, straight trunk-trained fast-growing sweet wild cherry, typically a Mazzard or Mahaleb cherry.

The “top-graft” or weeping portion is a hybrid variety, either the white “Snow Fountains” weeping cherry or the double-flowering pink Higan cherry (Prunus subhirtella) (prunus “Snofozam”).

The top of the trunk, which can be three to five feet above the ground, is where the two plants are grafted together.

If the weeping part is routinely clipped, it produces the effect of an umbrella; otherwise, it can grow to be 25 or 30 feet tall.

On the trunk or rootstock, sprouts called “suckers” frequently develop. These will grow straight up and take over the tree if left unchecked, spoiling the weeping appearance.

How To Prune A Weeping Cherry Tree

Just below the weeping branches at the top of the trunk, there is a graft scar. Wild cherry, not weeping cherry, will emerge anywhere below the graft scar, thus it must be cut off.

Any time of year is appropriate, but the earlier the better.

People often search for “dwarf” weeping cherry trees. Actually, there is no such thing.

If not regularly cut back, any weeping cherry tree will eventually reach a height of thirty feet and a width of twenty feet.

The weeping cherry trees you see in landscapes are probably still young; once they outgrow their surroundings, most people cut them down and start over.

The tree’s size can be reduced by clipping it every season. The weeping branches will grow into a substantial canopy if you remove any sprouts that point upward.

How To Care For Weeping Cherry

Weeping cherry trees that are still young tend to be top-heavy and require propping for the first year or two in order to maintain them upright.

Many people have attempted to support them by piling dirt around the base or burying them deeper, but doing so will eventually cause the tree to perish (most likely sooner).

Any tree that is planted deeper than it was in the pot or root ball will suffocate and die.

You must securely stake the top-heavy young tree for at least a year after planting to prevent it from tumbling.

With weeping cherry trees, overwatering is a common error. Cherry rootstocks are actually very tough and can withstand dryness, but they are very sensitive to too much moisture and will drown if it is applied in excess.

Weeping cherry trees that have just been planted often just require a weekly deep-root soak (about five gallons). After establishing themselves, the trees shouldn’t require any irrigation at all.

Weeping cherries are a favorite of Japanese beetles and tent caterpillars. This issue can be avoided by using BT or fruit tree spray in May and June.

Applying Milky Spore under cherry trees is a different solution that will effectively suppress Japanese beetle grubs over time.

The weeping cherry tree is also vulnerable to invasions of borers (both adult and larval). A proof that you have a borer issue is sap oozing out of the trunk.

Severe infestations are disastrous and will require tree eradication. Your weeping cherry tree will presumably survive a slight infestation as long as it is strong and you continue giving it enough sunlight, water, and nutrients that it demands.

Secrets Of The Pruning

People frequently inquire about whether the weeping branches need to be pruned before they reach the ground. Unless you want the “bowl around the head haircut,” the answer is no.

Because the branches stop growing once they touch the ground, leaving them untrimmed creates the appearance of a lovely fountain.

Weeping cherries will fork no matter where you trim them. Trim inside a foot or two of the top graft for the best results.

More shoots will result from this, giving the plant a thicker appearance. Just after they blossom in the early spring is the ideal time to prune weeping cherry trees.

Trimming at other times of the year will take away the flower buds for the following year, preventing flowering.

Weeping cherries should not be planted too close to structures or pavement because they can develop and spread out to be 25 feet wide.

You don’t want this adorable little tree in the corner of your yard.