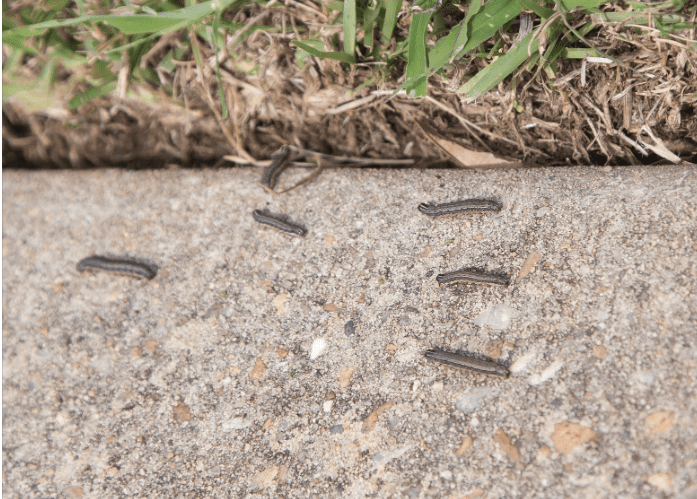 Tent caterpillars, also known as army worms, are much-despised — especially by campers and homeowners — as they march by the thousands and drop down on silky webs from tree tops onto picnic, tent, and barbecue outings.

Two infestations of the pests will likely merge this summer in the Thunder Bay area, said Bill Biggs, a forest health monitoring officer with the Canadian Forest Service.

Forest tent caterpillars are most attracted to trembling aspen but will feed on other deciduous trees such as birch, maple, elm, ash, and poplar, as well as on small bushes and garden plants.

Although they don’t usually kill trees, the caterpillars weaken them by eating all their leaves, making them vulnerable to attacks by other pests.

The pests run in a 10- to 20-year cycle, and infestations typically last for two to three years.

Farmers throughout the Maritimes and along the American East Coast were surveying devastated fields and hunkering down for a nasty fight with a pernicious critter that has laid waste to thousands of hectares of cropland.

A voracious band of armyworms has infiltrated farms from Quebec to Prince Edward Island, cutting a destructive path as they gobble up fresh forage and corn with incredible speed.

In most cases, the spotted and spiky caterpillars have left nothing but a bare and withered stalk in their wake.

“I’ve been farming here for 30 years, and I’ve never seen an insect do as much devastation in such a short period,” said Andy Bishop, a farmer on Nova Scotia’s west coast.
“They strip everything — they’re just like locusts.”

Bishop, who has a 125-hectare farm, has lost about 50 hectares to the worm, a dark, five-centimeter-long pest with yellow stripes down its back and a distinct white Y on its head.

In two days, Bishop watched as clusters of the worms extended a destructive march through his hay field and onto a roadway so thick with them that “the whole road was moving.”

The New Brunswick government estimated Friday that about 12,000 hectares of mostly grain and forage crops have been affected by army worms and that most areas of the province have reported infestations.

Agriculture officials in Prince Edward Island were nervously monitoring fields across the Island as the number of worm sightings grew. Rachel Cheverie with the provincial

Department of Agriculture, surveying hay fields on the Island on Friday, said farmers were starting to spray dozens of crops with pesticides in the hopes they could stave off the caterpillars.

It’s not clear how much it has cost the agriculture industry in the region, but farmers say they are spending thousands of dollars each on pesticides and losing thousands more to destroyed crops.

When they are in moth form, the insects float up to Canada with the winds from the southern United States and lay their eggs in June. They hatch, generally later in June, and begin a feeding frenzy that can last for more than a month.