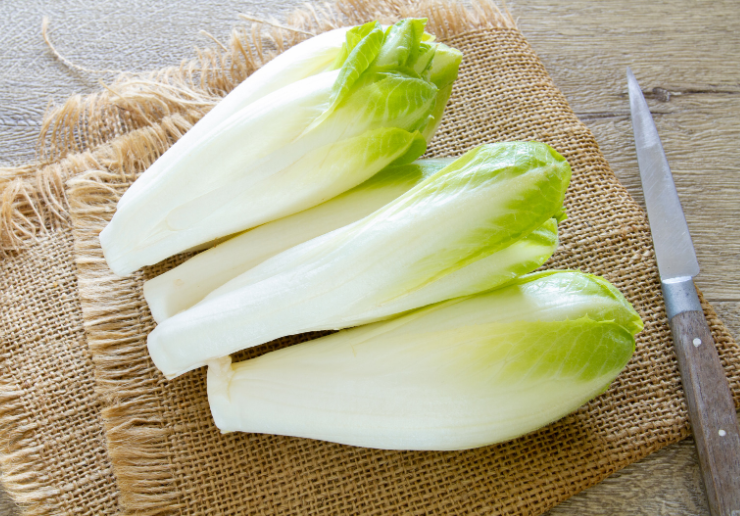 Endive is a compact head of lettuce with tightly bunched white and pale yellow leaves around a firm, elongated heart.

It may be eaten raw as a salad ingredient or simmered as a vegetable. Belgian endive and chicory are closely related, resulting in some confusion.

What we call Belgian endive in the United States is known as chicory in England. In England, endive is curly leafed lettuce used for a salad.

Endive’s curious blend of sweet nuttiness and sharp bitterness has gained the green a gourmet following.

Although endive grows green and lush when left on its own in the garden, the ultimate expression is the forced version, the Belgian endive, a furled sprout blanched by the absence of light.

Endive, also called chicory, comes in a curled form as well as smooth-leafed. With its wavy, crinkled leaves, curly endive looks like an unruly head of hair; the smooth variety has an open, lettucelike habit with serrated leaves. 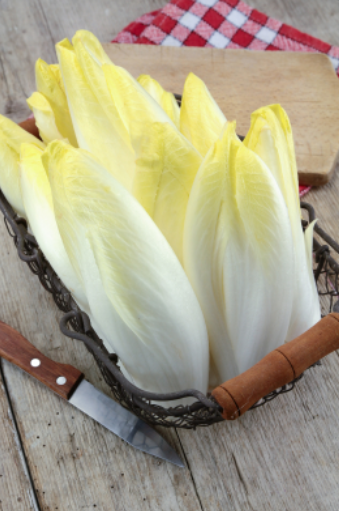 Both types possess a bitter edge that works best when paired with sweet salad dressings and fruit.

The Belgian version, a little sweeter, has a hint of walnut in its flavor. That and its celery-like texture make Belgian endive even more versatile in the kitchen than the green form.

Belgian endive can be braised or eaten raw; single leaves form small boats that make it a favorite for canapes and hors d’oeuvres.

Because of the fragile balance between the bitter and sweet, Belgian endive is at its best when eaten very fresh, before the sugars have ebbed. Specimens that display wilted leaf edges are apt to be more bitter than sweet.

How To Grow Endive

Growing your own takes planning and work, but provides a fun winter pursuit when little else is happening in the garden.

Seeds are sown in the spring. As the plant grows through the season, you harvest only the leaves — don’t pull the plant.

In the fall, after frost, the entire plant is lifted. Cut back the tops to an inch, and trim the roots to about six inches.

The roots are forced in a deep container that has drainage holes; a five-gallon plastic paint bucket works particularly well, though a sturdy cardboard box would do.

A six-inch layer of garden soil goes at the bottom. Roots are anchored in this moist soil, arranged side-by-side like bowling pins, the green tops facing up. As many as a dozen can be jammed together in a bucket.

Add soil up to the crowns, leaving the green portion barely visible. There should be another six to eight inches of clearance to the top of the container to allow them to grow.

Water the soil extensively and cover the container firmly with a lid so that no light penetrates anywhere.

Store the container where temperatures remain between 50 and 60 degrees — an unheated basement or cellar is ideal.

Root cellars are especially good for forcing endive because of the high humidity typically found there. Humidity levels can be raised by storing the container in a large plastic bag.

Every few days, check the soil moisture by pushing a chopstick or other slim implement down the side, avoiding damage to roots. If the end of the stick comes up clean, it’s time to water.

Watering should always be from the bottom up, by placing the bucket or box in a tray of water about two inches deep.

Leave it overnight and remove it from the water. Watering from above risks rotting young sprouts.

In about three to six weeks, sprouts are ready to harvest. Cut them off with a knife, leaving a bit of the crown behind; these will re-bud, providing two or three harvests before spring.

The roots should then be discarded because they will lose their strength and eventually cease producing leaves.

Belgian endive can be consumed raw in salads, and the leaves make fantastic hors d’oeuvres.

The heads can be sauteed as a side salad or boiled in the main course with other ingredients.

Scallops in saffron sauce with endive 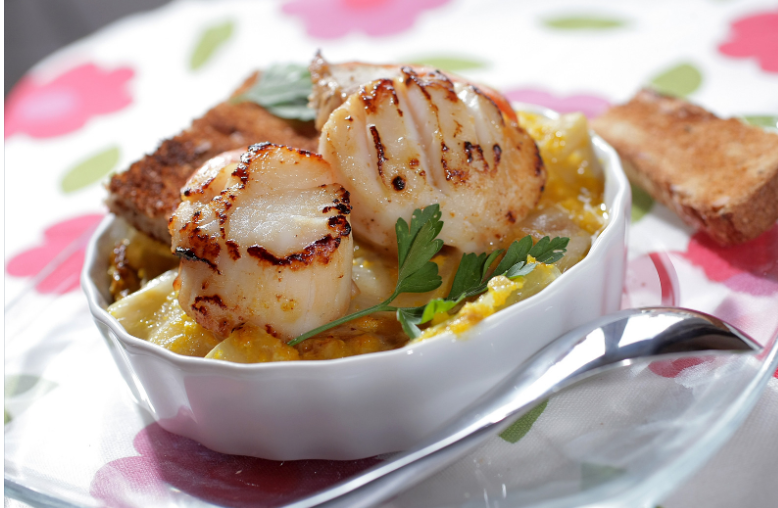 (Note: If saffron is inaccessible or too costly, use turmeric rather.)