Gardenfrontier
Home Gardening Caring for Your Yard Do Moles Hibernate? – How About Sneaky Gophers Too?
Twitter17FacebookPinterestSubscribeShare
17
SHARES 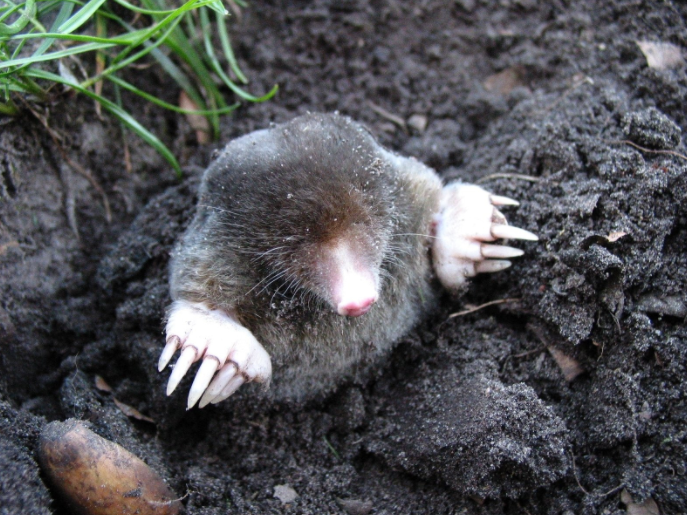 Are moles active year-round, or do they hibernate in the ground?

Do Moles Hibernate? Answer: Moles and Gophers are remarkable animals active the whole year, known for their specialized abilities for life underground.

Humans seldom see them and are often mistaken for pocket gophers, mice, or shrews. The mole is not close in relation to any small mammal except the shrew, belonging to the mammalian order Insectivora.

Moles are not classified as rodents and do not have characteristic rodent features, such as large, sharp front teeth. Instead, they have sharp, pointed teeth (like a cat) used for catching and eating grubs and earthworms.

Moles often get into conflict with homeowners when they burrow in yards.

The word mole is derived from a compound noun, meaning “earth thrower.” With their short legs, broad front feet, and sharp, stout toenails adapted for digging, these animals do indeed move a lot of soil, especially when they dig their deep nesting cavities and “home” areas, often 18-24 inches underground with interconnecting tunnels.

The shallow surface tunnels of the moles are used in the spring, summer, and fall, but the deep permanent ones are used year-round as the main avenues of travel.

Although you might think that moles would have quite a nightlife in their extensive caverns, they are pretty antisocial, living alone in their deep, dark underground homes, coming together only once a year when they mate around Valentine’s Day in mid-February.

Their living headquarters are six inches in diameter and lined with dried grass, leaves, and other vegetation.

Moles are active throughout the day or night, summer or winter, although they are most active in the shallow tunnels in the spring or fall after rain and in the early morning or early evening.

Both moles and gophers tunnel underground but close to the surface to find food, and both leave piles or mounds of discarded soil on the surface of the ground.

Molehills created by moles are volcano-shaped with a central hole: mounds left by gophers are more fan-shaped, and the hole is sealed.

Moles push the soil up through a vertical tunnel while gophers dig at an angle, pushing soil backward and up. Moles leave ridges, which show above ground as they tunnel and build deeper feeding tunnels and the ones closer to the surface. 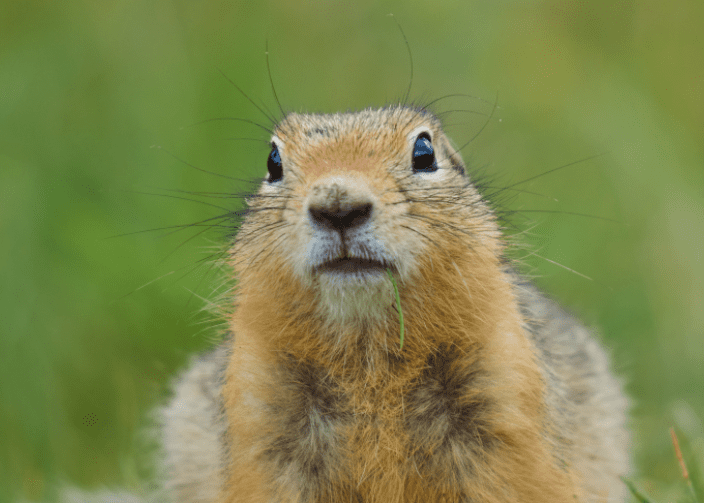 The gophers leave no trace above ground except the piles of rich-looking black soil mistakenly called “molehills.” They dig deeper only to make a grass-lined den and a food storage room about 2.5 meters down where they are safer.

But as most roots and tubers are close to the surface, their food foraging tunnels are 10 to 20 cm below the surface. Some tunnels exceed 100 meters, and there is usually one gopher per tunnel since they are extremely reclusive.

Mating season is up to six weeks after the spring thaw, and about three weeks later, the young are born. Northern Pocket Gophers have only one litter of four or five babies a year, and the offspring live with the mother for 5 to 8 weeks, maturing at a year old.

Females have a life span of 3-5 years, males, considerably less. Northern Pocket Gophers are active all year round, collecting food and sometimes even pushing mounds up under the snow.

They do not hibernate and are active day and night. Many plants take advantage of these bare mounds to get an early non-competitive start.

It is tough to rid a yard or field of pocket gophers, often regarded as pests. However, there are some advantages to having gophers on your lawn (it’s true, really!). Gustave J. Yaki called them “subterranean rototillers” in his article on the Internet.

One estimate is that a pocket gopher can turn over a ton of soil in a year without disturbing the surface and producing 30 -50 mounds.

How is this good? Well, it increases soil fertility by adding organic matter and feces. It improves soil aeration and water infiltration, reduces compaction, and increases the rate of soil formation by bringing subsoil to the surface.

To prevent grass in the area under the mound from dying, take this valuable, pre-tilled, ready to plant soil, move it to where you need it and use it. Add it to your garden, or you can use it for potted plants.

If you feel you must get rid of them, good luck. Natural predators of the pocket gophers are hawks, owls, foxes, coyotes, and weasels, but most people don’t want them on their lawns either.

There are many methods of extermination listed on the Internet, most of which are unsuccessful, and some are downright funny. I saw one beast briefly, but not before our friend’s cat had eaten the head off.

Once he noticed them, our dog caught two more, so if you have mousers at your house, you may be able to reduce the population somewhat.

But that’s only if you feel you have to. Unless they are nuisances, why not live and let live and put their services to good use?

Control methods that work include trapping, repellents such as Mole Med and Mole Exit, and poison baits containing Talpirid.