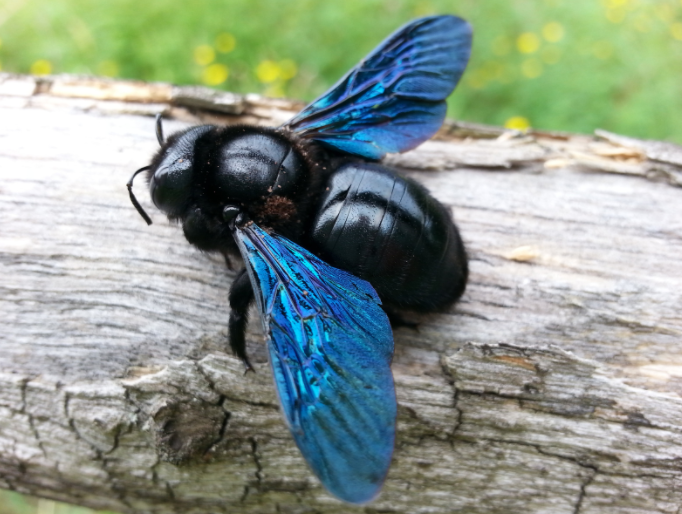 How To Get Rid Of Carpenter Bees

Carpenter bees are not classified as “wood-destroying” insects like termites and carpenter ants. If they choose your house, they can be a pain.

They’re called carpenters because they leave little piles of sawdust under where they’re working, much like a human carpenter would do when cutting a board with a saw and dropping the dust just beneath the cut.

They are large flying insects that resemble bees but do not produce honey.

The males do not sting, but the females will bite if handled roughly. I’d have no idea how to determine gender, and handling one would be impossible for me. They have a solid resemblance to bumblebees.

Bumblebees have a hairy abdomen with yellow spots, but I’d only look at one that was dead to identify it. In our case, the only difference between the two is their behavior.

Signs Of Carpenter Bees In House

Females are the ones who make perfect 3/8-inch-diameter holes in raw or stained wood or on wood with a thin or damaged paint film. It appears to be a bullet hole.45 caliber. They prefer cedar, but any natural softwood wood trim or siding will suffice.

After boring about a 1/4 or 1/2 inch into the board, they turn 90 degrees and chew a chamber into the wood for about 4 to 6 inches along the grain for a brood chamber – all at the diameter of the surface entry hole.

They deposit larvae there, sealing them at the chamber’s end with a paste made of chewed-up sawdust, pollen, and bee spit. It takes one to three months for the larvae they deposit in the chambers to mature, after which they emerge as full-grown carpenter bees.

Mother bees will sometimes reuse old chambers rather than build new ones. Even though the boring they do doesn’t seem to harm the structural integrity of the wood, I’ve seen trim boards that look like they’ve been shot at with a pistol because they have so many perfectly round bee holes, just like the ones on your house.

Carpenter bees will be buzzing around the boards, flying around and diving aggressively, and they will chase you. The males who are doing this are unable to sting, but they hope that any potential predators of the larvae they are protecting are unaware of this. ‘

How To Get Rid Of Carpenter Bees Naturally

Carpenter bee larvae are a delicacy for woodpeckers. Let’s say you have an unlucky combination of a carpenter bee infestation and a woodpecker discovery at your home.

In that case, the woodpeckers will rip some nasty holes in your wood trim in search of food, making a racket in the process. Your wood trim will be damaged as a result.

So, how to get rid of carpenter bees? Sealing the holes and painting the wood is the most common method of carpenter bee control. Some people recommend using Sevin to dust the holes. If you use a soft caulk on the holes, they will bite right through it.

So the best material to use is plastic wood, which, as anyone who has used it before knows, becomes harder than real wood. Water Putty, another commonly used wood putty, also works, but the paint must be an actual surface film, not just a wood stain.

This may be a problem for some since cedar is one of the most popular woods among carpenter bees and homeowners alike, and cedar looks best when stained.

I’ve heard of stuffing the bee holes with steel wool or nailing standard window screening over the holes to deter these bees. Wrapping the trim in vinyl or aluminum is a bold but effective strategy.

If you’re going to replace wood, make sure to paint it well before putting it up to keep bees and rot at bay.

How To Keep Carpenter Bees Away

A friend of mine spent an afternoon chasing carpenter bees with a pool skimmer on a handle. He probably caught ten or twelve fish. So there aren’t many of them to cause a problem.

Pest control companies offer a spray treatment for those who don’t want to deal with the bees themselves. It is reasonably priced.

Carpenter bees are known for their pollination abilities. They don’t hurt anyone except holes, so plug, caulk, paint them away, and hope they go somewhere else.

Carpenter Ants: How To Get Rid Of The Pests 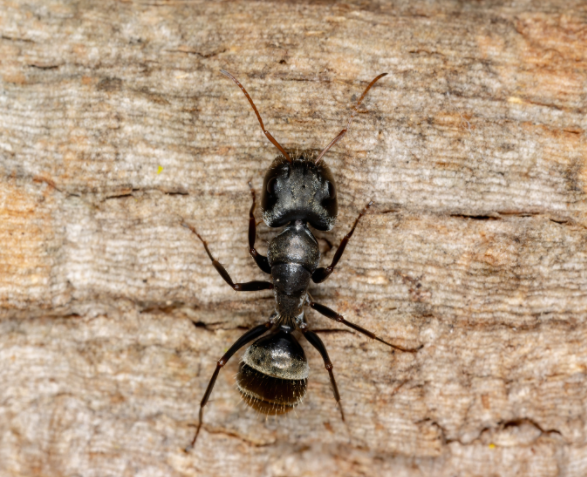 Carpenter ants, the most common pest ants in the northern United States, get their name from the “galleries” they excavate while building their nests – typically in wet or damaged wood, according to Clint Briscoe, a Terminix spokesman.

Carpenter ants, on the other hand, will tunnel through dry, undamaged wood once they’ve established themselves.

Carpenter ants come in a variety of colors and shades and can grow up to 5/8-inch long. They have a multitude of colors, including black, brown, black, red, and black, depending on the species.

Take To The Skies

Carpenter ants swarm when they leave existing colonies to start new ones, which usually happens during warm spring days. The males often die after their mating flight, and the females (queens) seek shelter to start their colony.

Typically, nests are built in piles of lumber, hollowed trees, and dead branches. Winged ants indicate the presence of an active colony nearby.

In order to survive, the main ant colony must have a constant source of moisture, which is why it is usually found in deadwood outdoors.

A water leak or an overly wet, poorly ventilated crawl space or attic will be linked to the main colony. Any suitable void, such as hollow doors, curtain rods, shower rods, and attic insulation, can be used to start a satellite colony.

These ants will build trunk trails that connect the main colony and satellite colonies. (Carpenter ants are mostly nocturnal, so they rely on chemical trails to get around.)

Colonies can have more than 100,000 worker ants in them, and queens can live for more than 20 years. Glycerol, a compound found in antifreeze, is present in the bodies of some members of the carpenter-ant caste system to prevent them from freezing.

Store firewood away from your house and remove wood scraps from around the foundation to deter carpenter ants. Trim dead tree limbs, remove stumps from the yard, and keep shrubbery and tree limbs away from the house.

Check for moisture in crawl spaces and seal any plumbing and roof leaks. Repair any gutters that are broken or clogged. Water from gutters should be directed away from the foundation.

Getting rid of your common ant is difficult enough; carpenter ants should be dealt with by a professional. Control entails locating and treating as many satellite colonies inside and outside the house as possible, as well as attempting to locate and treat the parent colony.

Baits may be used by exterminators, but due to carpenter ants’ finicky feeding habits, these can have mixed results.