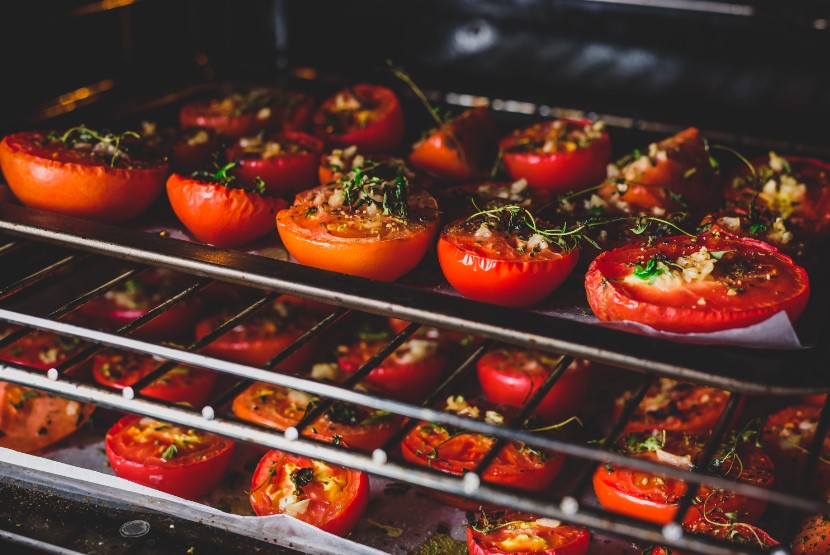 Tomatoes are little bursts of sunshine. No wonder savvy cooks do everything they can to carry that summery flavor into the dark days of winter.

They toil for hours in the kitchen, making sauces, salsas, relishes, and pickles. They boil, simmer, puree, freeze, and can.

Some even dry their tomatoes. Homemade-dried tomatoes are a far cry from the chewy, leathery strips found in those pricey jars of “sun-dried” tomatoes.

The home-dried tomatoes in oven retain their color and delicacy while offering concentrated flavor.

The oven caramelizes the tomatoes, providing an intense sweetness not usually found in the commercial product.

You Can Make Dried Tomatoes In Oven.

Just set the oven to its lowest possible temperature, 170 to 200 F (77 to 95 C) is about right; arrange the tomatoes in a single layer on a baking sheet, and dry slowly for several hours.

You can even make it overnight while you sleep. The next morning, pack the tomatoes in herb-flecked olive oil and refrigerate.

These oven-dried tomatoes keep for two or three months in the refrigerator if you follow a few common-sense precautions.

Keep the tomatoes refrigerated, and use a clean fork — no fingers — to lift the tomatoes out of the oil, which will have solidified because of the cold.

Don’t throw out the oil, either. It will take on the flavoring of the tomatoes and herbs.

You can dry all sorts of tomato varieties. Small tomatoes, like cherry, grape, or pear tomatoes, can be dried whole. Larger tomatoes should be sliced first.

Rinse the tomatoes under cold running water, dry briefly in a colander, and then dry them off with a paper towel.

Line the bottom of a baking sheet with parchment paper or aluminum foil. This liner will make it easier to remove any tomatoes that might otherwise stick to the baking sheet.

In a modest bowl, mix olive oil, kosher salt, and black pepper. Working one handful at a time, roll the grape tomatoes in the seasoned olive oil until lightly covered.

Sprinkle with olive oil and season with salt and black pepper to taste.

Put the baking sheet on the middle rack of the preheated oven. Bake very, very slowly for 8 to 10 hours.

The tomatoes will be lightly wrinkled, like big raisins. The skin will feel a bit crackling, almost papery, but will not be leathery. Most important, the tomatoes won’t have a heavy or watery feel.

Pack the tomatoes in a clean plastic or glass container. Layer tightly, but don’t crush.

Place a few sprigs of any fresh herb in between the layers. Use whatever is in the garden or market: parsley, basil, sage, summer savory, or thyme.

Cover the container and refrigerate.

The olive oil will congeal, don’t worry about it. When ready to use, scrape off the congealed oil, or leave the tomatoes in a shallow dish to reach room temperature.

As the tomatoes warm, the oil will reliquefy and drip off. Please don’t throw the oil away; it has a lovely flavor that’s great in sauces or salads.