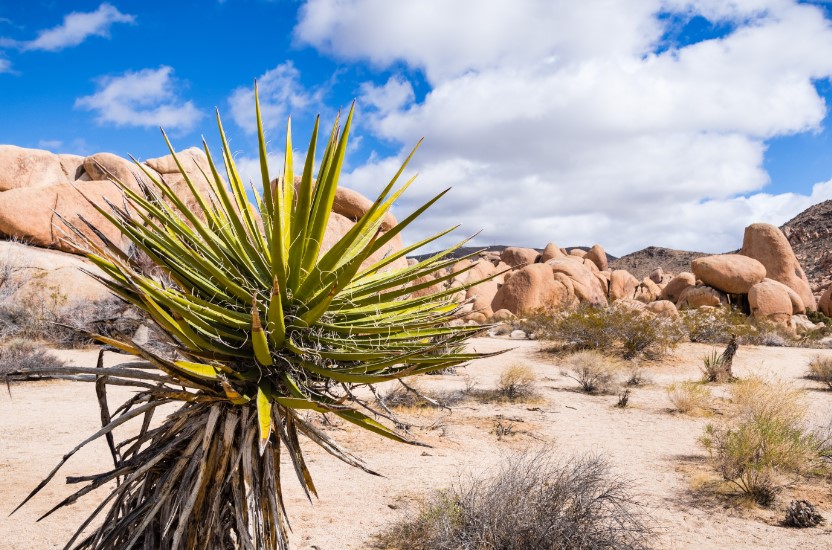 Yucca is one of the most important economic plants in the American Southwest.

It is widely used as an ornamental, and one species, Yucca elata , serves as the state flower of New Mexico.

Along with lechuguilla, prickly pear, and sotol, yucca was one of the most useful plants to early humans in our state.

Exactly every part of the plant yields something of value, whether a foodstuff, fiber, soap, tanning agent, medicine, building material, or fuel.

Amid hundreds of representations of animals and humans, yucca is one of the few wild plants depicted in prehistoric petroglyphs.

Four different parts of the yucca are edible. The flower stalk when fully grown, but before the buds have expanded, is considered by the Apache the most delicious part of the plant.

This tribe roasted the stalks on embers and removed the charred portions to reveal the tender, sweet interior.

Alternatively, they peeled the raw stalks, chopped and boiled them, and then dried them for storage.

The Kiowa, likewise, consumed the stalks, as did Hispanic and Anglo settlers. Yucca blossoms themselves offer another delectable treat.

Yucca flowers is dated by archaeological evidence to at least 500 bce, but it likely predates this by several millennia.

The whitish blossoms, with their pistils and stamens removed, are generally sweet tasting and rich in vitamin C.

They can be eaten raw, sautéed, or fried. The Apache used the blossoms of Yucca elata , which seems to have some of the tastiest flowers, as soup vegetables; they also boiled, dried, and stored them.

Pioneers reportedly gathered yucca flowers in quantities, pickling them or cooking them like cabbage.

The yucca crowns offer a third, more infrequent, food source. The crowns (and sometimes young leaves) could be pit-baked like sotol and then immediately consumed or pounded into a flour to be dried and preserved.

By far the most famous and delectable part of the yucca is the fruit pulp from the species with fleshy pods.

The best known of these is Yucca baccata , known as the banana yucca or dátil, which is found in Texas only in the Trans-Pecos.

When the brown outer pulp of the banana yucca fruit is completely ripe, it is said to have a peculiar taste that variously resembles apples, applesauce, or dates ( dátil being Spanish for “date”).

Roasted, the fruits are compared to sweet potatoes. The fruits were a major food item among the Mescalero Apache, Lipan Apache, Navajo, and Zuni.

Immature yucca fruits were frequently allowed to ripen indoors, to prevent animal and insect predation. They could be eaten raw, or following Navajo fashion, they could be dried, ground, and kneaded into small cakes, which were then sun-dried.

Long-lasting and easy to transport, these cakes made a favorite staple for the warpath. When rehydrated, they were eaten with breads, meats, and other dishes.

The Apache imbued dátil fruits and cakes with religious overtones; gathering and preparing the fruit required prayer, and the food was particularly used in puberty ceremonies for girls.

Curiously, the extensive use of yucca fruits among Native Americans of the Southwest was only rarely adopted by Hispanics and was practically ignored by Anglo settlers.

Northern Mexicans occasionally made a liquid from fermented yucca fruits that was distilled into a rather indifferent rumlike aguardiente.

The fruits of the drycapsuled species of Yucca , which make up about half of our species, are much less palatable (actually, they are nearly inedible).

This may help to explain why yucca fruit consumption in general failed to gain wide acceptance among nonnative peoples. The Zuni, however, managed to eat even the dry capsules by boiling them into a “sort of pickle” (Standley 1912).

Perhaps the most usual and widespread use of Yucca as a genus was for fiber. Certainly in the prehistoric desert Southwest no material was more popular for cordage.

Yucca fibers were removed by slicing the leaves lengthwise and stripping them, or by soaking and pounding.

Yuccas are also more widespread throughout the Southwest, lechuguilla being mainly confined to the Chihuahuan Desert historic humans twisted yucca fibers into cords that were the foundation for twine and rope used in diverse items, from bowstrings, straps, belts, lashings, rope ladders, snares, and nets to more complicated woven and plaited items such as cloth,

which could be interwoven with feathers and strips of rabbit fur to make elaborate robes, and the ties of sandals, hundreds of which have been found throughout the Southwest and west Texas. Historic native uses included hats, hairbrushes, mattresses, and horse blankets.

Mexicans have long used the fiber, variously referred to as palmilla fiber, palma pita, and ixtle, for tying bundles of cornstalks and fodder, and plantations of the American South made thongs from yucca for hanging hams and bacon.

Toward the recent part of the nineteenth century, the U.S. Department of Agriculture patented a machine for yucca fiber extraction.

The fiber surged in popularity during World War I, when supplies of jute from India became scarce.

Approximately 80 million pounds of fiber from Y . glauca and Y . elata were collected at this time in New Mexico and Texas for the bagging of cotton bales.

Many rural Mexicans still rely on yucca harvesting for income, though the quality of the fiber is generally considered inferior to commercial cordage fibers, which keeps economic prospects limited.

Strips of the fibrous leaves of yucca were utilized in basketry and sundry items. Mescalero Apache basket makers used the leaves of Y . glauca extensively for baskets and special drying trays for dátil fruits.

Many other tribes employed the leaves in the manufacture of plates, bowls, masks, tablets, dolls, prayer sticks, and various mats. The Tohono O’odham of southern Arizona still use yucca leaves for trays, sewing baskets, and decorative containers.

Yucca leaves, chewed until the tips are frayed, are the traditional paintbrushes used to decorate native southwestern pottery and are still employed by contemporary Pueblo artists. As the name soapweed suggests, another main use of yucca is for soap.

Again like lechuguilla, the roots of most species of yucca yield a very decent laundry detergent, body soap, and shampoo.

The fresh roots are pounded to a pulp and mixed with water, or shaved and simmered until foamy, to produce an excellent cleanser, called amole among Spanish speakers, which lathers freely and is easy on the skin.

Amole is particularly suitable for woolen goods, such as blankets and rugs, since lye soaps tend to mat woolen fibers.

Native American tribes, both north and south of the border, still make frequent use of yucca soap for laundry, though they equally value it as a shampoo, especially in ceremonial contexts.

Traditionally, shampooing the hair with yucca root was required before partaking in ceremonies of the Comanche and Pueblo tribes, and amole was believed to make the hair long, straight, strong, and especially glossy.

The Kiowa maintained that it controlled dandruff and skin irritations. Other ceremonial connections include the Yavapai, whose warriors purified themselves with yucca baths after battle, and the Hopi, who wash the head of a newborn with yucca soap on the twentieth day after birth.

At least one American company advertised amole in the early twentieth century, and the product is still available in specialty markets in San Antonio. Although the vast majority of yucca uses centered around food, fiber, and soap, the plants provided for a variety of minor applications.

The Kiowa, for instance, tanned hides with a yucca root preparation. The Tarahumara of Mexico used the roots and leaves for fish stupefaction.

Various native tribes, as well as Hispanic and Anglo settlers, used both roots and leaves to prepare salves and tinctures to treat rheumatism, bruises, and inflammation.

Beams and timber from the larger-trunked Yucca species have been found as building materials in ancient cliff dwellings, and the spongy fibrous wood was utilized for surgeon splints during World War I, when large quantities were shipped to European hospitals.

Similar to sotol, yucca holds a special connection to fuel and fire. Many Indians, such as the Apache, used the dried flower stalks as hearth boards for their fire drills.

The Tonkawa even had a Prometheus-like myth in which a wolf steals fire from the sun and manages to light a yucca stalk, saying, “This shall have fire from now on, and the flint-rock too, and several plants” (Sjoberg 1953).

Dried yucca leaves, like those of sotol, make excellent fuel for fires, as the lower, inner layers on the trunk remain dry even in rainy weather.

Yucca seedpods, when ignited, are said to Livestock, such as cattle, relish yucca flowers, and animals have been known to overturn plants to obtain them. Naturalists attribute the near absence of yucca seedpods on heavily grazed ranges to that preference.

During severe droughts in the Southwest, such as that of 1916– 1919, the chopped trunks and leaves of Yucca elata and Y . glauca , supplemented with cottonseed meal, were extensively used to feed cattle, and special shredding machines were developed for processing.

All ethnobotany aside, it is impossible to leave Yucca without mentioning its special relationship to yucca moths.

In a mechanism that discourages self-pollination, the male (pollen-bearing) flower parts of Yucca are remote from the female (ovule-bearing) parts of the flower.

The fertilized female yucca moth gathers a sticky mass of this pollen and carries it to another flower, where, having laid her eggs in one of the carpels of the fruit, she crawls up the style and smears her pollen on the stigma.

This ensures pollination and the development of seeds, on some of which her developing larvae will depend for survival.

This special relationship of mutual dependence has traditionally been seen as a textbook example of obligate mutualism (Bogler et al. 1995).

Forty-odd species of Yucca are believed to be virtually dependent on several species of yucca moth for sexual reproduction. Asexual (vegetative) reproduction can occur in the absence of these moths, and large clonal populations are found in the field.