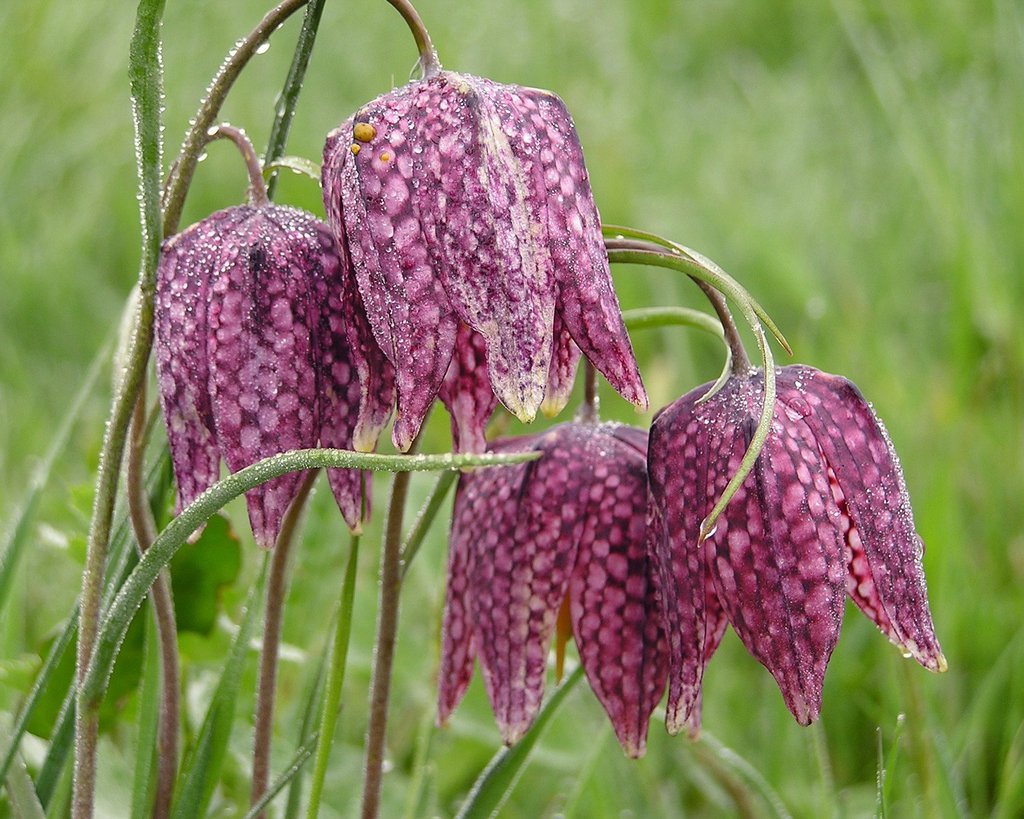 These perennial bulbs make a bold statement with their striking displays of vivid color.
The term “tessellated” means having a tiled or mosaic-like pattern, and it is often this unusual feature of many Fritillaria that first attracts consumers.

The array of flower-colour combinations is equally attractive and mixes two or more colors in varying proportions and shades. Colors range from chocolate browns, reds, oranges, and purples to yellow-greens and plain white.

Fritillaries are perennials of the lily family. There are about 100 species found across the temperate regions of the northern hemisphere, particularly the Mediterranean, the mountains of South-West Asia, and western North America.

They vary widely in height, from 15 to 120cm. Smaller, delicate species, such as the native F. Meleagris. The snake’s head fritillary. Grow well in pots, woodland gardens, and rockeries. Just as impressive is F. imperialis, which provides focus in the herbaceous border.

Fritillaria leaves tend to be lance-shaped or linear, with several leaves usually alternate on upright, unbranched stems. The bracts form the characteristic crown in F. imperialis. Most fritillaries flower in spring and early summer.

Fritillaria flowers are usually pendulous or semi-pendulous and usually bell-shaped, with petals and sepals very similar in appearance. Flowers of some of the species have an unpleasant foxy odor, but this may serve to attract insect pollinators and possibly discourage browsing.

The least demanding species and suitable for naturalizing, herbaceous borders, rock gardens, and pots. Some species are fully hardy, but others – especially the smaller ones- flower early, and those from warmer climates require winter protection.

Exact soil requirements vary, but all require fertile, gritty, well-draining soil. It should remain moist but not wet during the growth period and almost dry during dormancy. Conditions during dormancy are important as bulbs may rot or dry out.

Handle fritillaria bulbs with care as they bruise easily, and bulbils will dry out. Those with large, hollow crowns may hold water and rot. and should be planted on a bed of sharp sand as good drainage is critical.

It takes bulbils and seeds three to five years to reach flowering maturity. Pots are best kept in a cold frame or cold greenhouse under controlled conditions. Propagate from seed when ripe or in spring, in a loam-based, propagating mix with additional sharp sand: germination may take six months.

Keep seedlings at a minimum of 5°C (40°F) during the first winter. The species mentioned are easily propagated and grown, but rarer species are available. Care should be taken that rare species are not collected from the wild as some wild populations are threatened.
Fritillaries can suffer slug and lily beetle damage.

WHAT THE SPECIALISTS SAY ABOUT FRITILLARIA

Terry Hunt, partner, Edrom Nurseries, Berwickshire “The species we grow are those with the ‘wow factor. We grow about 80,000 plants annually and cannot give them the individual attention that amateur alpine growers would give to varieties with particular requirements.

We produce those fritillaries wide tolerance range as we keep them in alpine tunnels and roads. We don’t do F. imperials and F. persica as they tend to struggle in this part of south-east Scotland.

“We plant 50 to 70 bulbs in the same container with plenty of grit and leave them for several years until reaching flowering maturity. In August, when they are completely dormant, we pot them individually into 9cm pots.

“Of the shade-tolerant species we grow. F camschatcensis. the black fritillary. Is one of the most striking. It multiplies easily using rice-gram bulbils, and we plant it under 50 percent shade netting to mimic the woodland setting. We also grow F.cirrhosa, a Chinese species with tendrils.”

Chris Birchall, secretary, the Fritillaria group of the Alpine Garden Society, “Not all fritillaries set seed, but when they do, they are easily grown from seed. We sow in September, and flowering starts three to seven years later, depending on the species.

Each year before they reach flowering maturity, we try to keep them in leaf as long as possible before dormancy to increase the bulb size. In the south of England, fritillaries are mainly susceptible to fungal diseases and lily beetle, just under 10mm in length and bright red.

Chinese species tend to do better in the North and Scotland, requiring colder winters, cool summers, and moist soil during dormancy. Local conditions at nurseries will influence the species grown.”

Stella Rankin, owner, Kevock Garden Plant Nursery, Midlothian “We had 14 fritillaries in our bulb catalog this summer, but our biggest seller in the spring is F. Meleagris, which is so charming in pots, people will buy it on impulse.

It is also perfect in rockeries and grassy areas around trees in the garden. We scrunch up the seed pods and sprinkle seeds in the grass. F. imperialism is an excellent structural plant – stunning, with giant heads of flowers. Ours grow on a sunny, well-drained slope, and we put a handful of grit around the bulbs.

“We also grow and sell the white-flowered F. buchartca, which is beautiful. It is less bold and smaller than F. imperialis. F. michailovskyi Award of Garden Merit has dark purple and yellow-banded flowers and is good for rockeries and troughs. Fritillaria species don’t like soggy soil and must be grown in gritty or well-drained loam.”

* F. biflora ‘Martha Roderick’ has rusty-red and white flowers. It flowers in early summer and is ideal for open sunny places, rock gardens, and pots. Stem measures 15-40cm.
* F. camschatcensis flowers plum purple with yellow and green. It is the last fritillary to bloom in midsummer and has an unpleasant odor. Ideal in woodland gardens. Stem measures 15-75cm.

* F. imperialis has orange and red flowers with green bracts grouping above the blooms. The bulb and flower have a foxy odor. It flowers in early to mid-summer in full sun. Stem measures 50-150cm.

* F pallidiflora AGM has primrose-yellow and green flowers with red-brown tessellations. It flowers in early summer and has a slightly unpleasant odor. Stem measures up to 80cm.
* F. persica has plum-purple and green flowers. Flowers early to mid-summer and may need staking. The stem reaches 100cm.
* F. persica ‘Adiyaman’ AGM has darker plum-purple flowers than F. persica. The stem reaches up to 60cm.

* F. uva-vulpis has purple and yellow flowers. It flowers in mid-spring, in moist soil. It is a fine choice for rock gardens and pots. Stem measures 10-35cm.

The care requirements for fritillaria, crown imperial, and fritillaria are different. Although the smaller fritillaria thrives in full sun, it can also bloom in part shade, especially if it is in the shadow of a deciduous in early spring. In moist, humus-rich soil, plant fritillary at least 5-6 inches deep.

These large bulbs should be planted 6 to 7 inches deep, 8 to 10 inches apart, and placed sideways in the fall to keep water from collecting in their divot. These bulbs, although significant, are very fragile.

They should be left alone after they are planted. Mulch them to protect them from winter’s chill.

It is worth noting that all parts of crown imperial fritillaria smell like Skunk. You may want to place them at the border’s back. The good news is that this scent repels hungry animals.