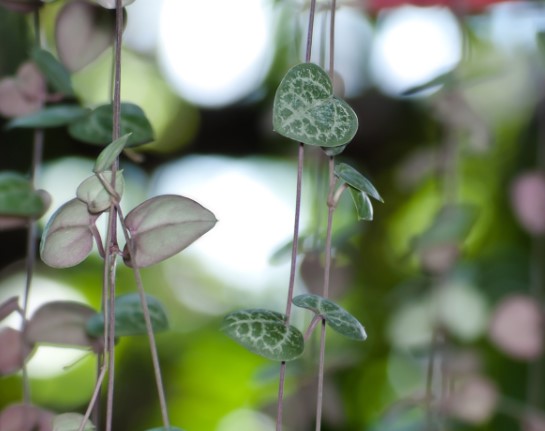 It is also known as string of hearts, rosary vine, or rosary vine. The tubers growing along its stem give it the appearance of a rosary.

Its heart-shaped foliage is silvery green and is mottled with deep green veins and stems as thin as thread. Along the stems at random are large tubers from which new leaves and stems appear. These are growing points and provide storage for the moisture that this plant conserves.

Ceropegia woodii, known as a string of hearts, is relatively easy to grow. As all succulents prefer, it is not advisable to over-water this plant. Excessive moisture tends to rot the roots and makes for miserable plants.

The string of hearts tends to rest in winter without showing too much growth and is extremely vulnerable to over-watering at this point.

According to its size, when potting this plant, remember to keep it in a rather small pot.
Under-potting helps this plant to stay healthy. Accustomed to sandy clay-like soil, ceropegia woodii likes to be planted in well-drained soil.

Afternoon sunlight is preferable, though morning to noon sun will suffice. The plant may get a pinkish tinge to the stems in scorching, dry conditions. As with all succulents, watch for mealy bugs.

These appear as flat, white, oval-shaped insects with tiny hairs surrounding their bodies. In bad infestations, they will appear as white cottony masses that will peel off in stringy bunches when touched.

A cotton swab dipped in alcohol, dabbed on the bugs will kill them, but it is tough to eradicate this pest. Since it lives in the plant’s root, it often goes undetected until it is too late.

Cuttings can easily be started from the tubers on the stems of the plants. Submerge the tubers halfway into sandy soil and water. Ranging from one month to six weeks, the roots will grow out of the swelling and produce new plants.

Cuttings should only be taken during active growth in the spring and summer, as the plant is almost dormant in winter.

This tropical plant is found in the range of Madagascar throughout lower Asia to Australia. It appreciates temperatures in winter to 10 C and will not need water until the temperatures rise.

The string of hearts is most exotic as it flowers. The blossoms appear as tubes and often have tips that form a cage-like structure at the opening of the bloom.

The colors spread from white to pink, red, brown, maroon, purple, green, yellow, and black, and every mix in between.

Inside the blooms are hair-like structures that may trap flies and other insects until the flower wilts.

The odd blooms of the string of hearts are the highlight of this strange-looking plant. Worth the search; it will be a great addition to any succulent collection.

Step By Step Care Tips For Growing String Of Hearts

Taking care of your plants

The string of hearts is a fast-growing plant that will bloom abundantly if given the right conditions. This plant is sturdy and can withstand periods of neglect quite well.

Your string of hearts will produce the most flowers and growth if it is placed in bright but indirect sunlight.

The string of heart plants thrives when potting mix cacti is well-drained. They can tolerate decent fertility but can look sloppy if the mix is too rich.

To ensure adequate drainage, you will need to add pumice or perlite to an ordinary potting mixture.

The string of hearts is drought tolerant, but it needs more frequent watering than other succulent species. After letting the soil dry, please give it a good watering. Too much water, though, can cause swollen leaves, leaf drops, and a messy growth habit.

Your string of hearts plants should not be left in standing water. They will quickly die if they are not able to drain the water well.

These plants can endure temperatures as low as 20 degrees Fahrenheit, but they cannot withstand prolonged cold exposure, especially if they don’t have enough moisture.

The string of hearts plants does not like intense heat. Good air circulation and warm temperatures are critical to best results. These plants do not like high humidity during winter dormancy.

Regular feeding of your string of hearts plants with a special fertilizer for succulents will be a good idea. It won’t be too high in nitrogen, as excessive nitrogen can cause plants to become soft.

The string of Heart Plants: How to propagate

Strings of heart plants are more easily propagated from stem cuttings than by seed germination. It is not easy to source seeds.

The stem cutting method is simple and usually yields good results. The rooting time for cuttings with at least two internodes usually takes between a fortnight and two months. You can also propagate single leaves and tubers that grow along the stem.

These plants can be prolific if given the right conditions. They also benefit from being repotted every few years. The delicate vines can break easily, so be careful. You should ensure that your new pot has ample drainage holes.