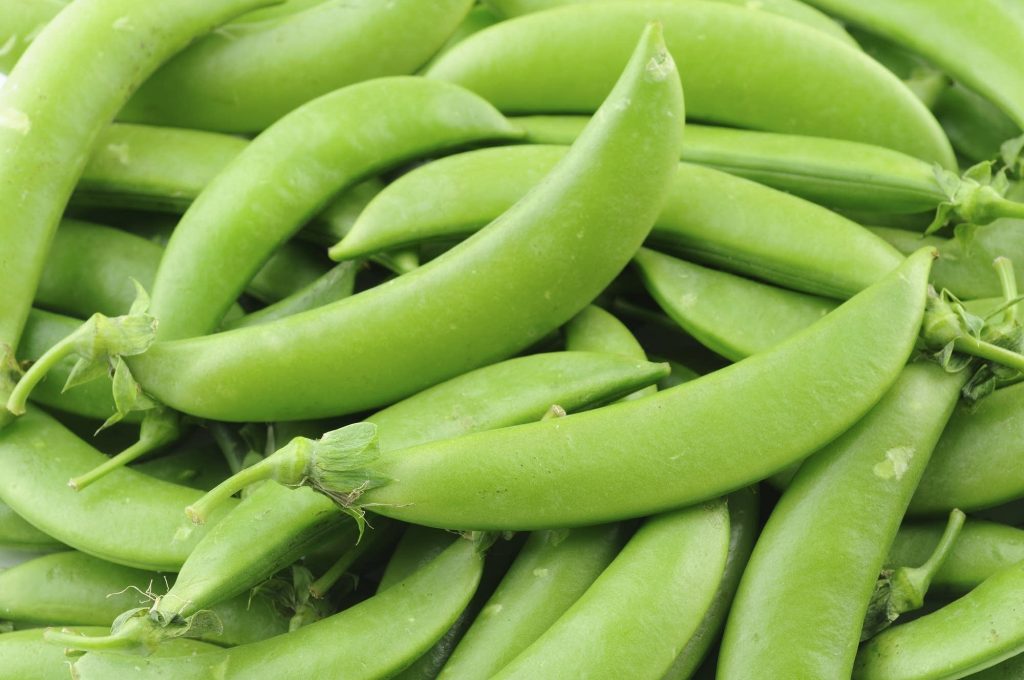 There’s no tastier vegetable than sugar snap peas straight off the vine. The pod’s crunch in your mouth as sweet flavors delight the taste buds. Not only do these peas taste good, but they also look delightful in the garden as they twist and turn, reaching for the sun.

Curly tendrils allow them to hug and hold on to a trellis. Small, delicate white flowers mark the spot where pea pods will form.

The sugar snap group of peas is a hybrid of the English pea and the snow pea. They have greater disease resistance and hold their flavor longer than either parent. Although they’re easy to grow, timing is critical.

Peas planted too late in the season will bloom, but the heat will not allow them to set fruit. But, don’t worry; young plants will tolerate frost.

In Spring, sow seeds as soon as the soil can be worked or six to eight weeks before the last frost. Plants will produce through spring until the weather gets hot. In the Upper South, they can be grown as an early-spring to midsummer crop.

In the Lower South, they may be grown in fall, winter, or early spring. The ones pictured here were planted in late February and began producing peas in April.

There are many selections of sugar snaps. Some grow tall and need a 6-foot trellis; others are dwarf, needing no support at all.

Although the dwarf varieties don’t need support, a small 3-foot trellis will keep them from being beaten to the ground during heavy rains and will make it easier to harvest ripe pods.

Seeds should be planted l inch deep in heavy clay soils and 2 inches deep in sandy soils. Plant the seeds 1 to 2 inches apart; later, thin to 3 or 4 inches. Don’t pull up seedlings when thinning because this could disturb surrounding plants.

One major drawback for gardeners in the West is powdery mildew. This fungus coats the leaves and stems with white spores and can wipe out a `Sugar Snap’ plant-the original All-America Selections winner and the old standby for flavor-before it produces much of a crop.

Some snap pea varieties are touted as mildew resistant. But do they stand up to such claims in the garden? We tested nine commonly available varieties.

(Of the nine, four are not labeled as mildew resistant, and five are listed as resistant or partially resistant.)

We planted one crop of each in March and a second in September and monitored each variety for mildew. Then a panel of experts from Sunset’s garden and food staff rated the varieties for flavor.

The bottom line? Snap pea varieties vary widely in flavor; some are crunchysweet, others watery and bland. For the snappiest peas, choose your varieties carefully or plant them in the fall when mildew is less of a problem.

Use clippers or scissors to cut unwanted plants to ground level. Space rows of dwarf varieties 2 feet apart; taller varieties should have 3 feet of space between rows.

The wider spacing for the larger varieties will allow enough room to construct a trellis between rows. Be sure the site you select receives six to eight hours of full sun daily.

Sandy loam soils are best for peas. Heavy soils will work but should be well prepared by
incorporating plenty of organic matter such as leaf mold or mushroom compost and loosening to a depth of 8 inches.

The pH should be between 5.5 and 6.8. When picking peas, be gentle; don’t rip them from the vine, or they may stop producing. A pair of scissors works well to remove ripe pods. To eat pod and all, harvest sugar snaps when the pods are flat.

To eat only the peas, pick them once the pods have turned fat and plump. The more mature and developed the pod, the sweeter the peas and the tougher the pod.

Pick them before they turn yellow. Once sugar snaps have been harvested, they should be eaten quickly because sugar turns to starch after they’ve been picked. Eat them raw in salads, steamed, or stir-fried.

If you’ve never tasted fresh sugar snaps, plant some now, and this spring, you’ll get a
chance to sample one of the garden’s tastiest treats.