Some Trees Retain Their Leaves All Winter 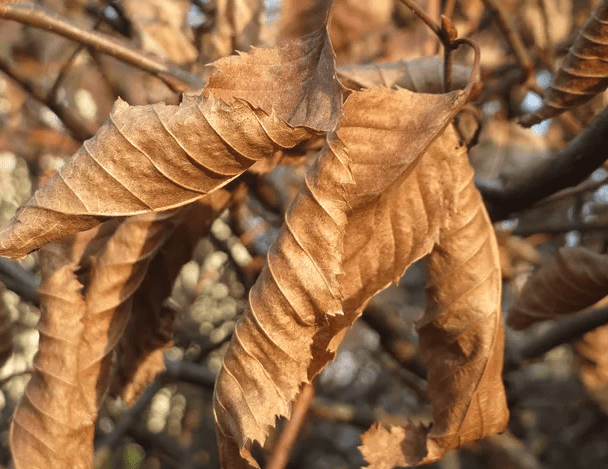 Marcescence is characteristic for trees such as beech (Fagus L.) and oak (Quercus L.), but to date, the ecological consequence of keeping dead biomass aboveground is not well understood.

One theory suggested that the retention of dead leaves could close a nutrient cycle for the trees.

Marcescence is the process by which living plants retain dead parts. These parts include leaves, flowers, and organs.

Oak and beech trees retain dead leaves during the winter, and heather keeps its dried corolla.

But there are many other reasons why plants may retain dead elements. Here are just a few of the causes.

But remember that not all of them are harmful. Some plants may benefit from the peculiarities of marcescence.

Most deciduous trees shed their leaves during the fall and winter seasons. However, some species of deciduous trees, including beech, hornbeam, and some types of oak, exhibit marcescence.

Scientists have not established the exact reason for this behavior, but several common theories exist.

Some of these theories are based on the observation that older, younger trees have less of the abscission layer than do the leaves of more significant trees.

In nature, marcescence is a natural process in which trees retain some or all of their dead organs.

Deciduous trees shed leaves in the fall, but evergreens do not. Instead, they retain their leaves through the winter.

The reason why deciduous trees retain their leaves is to conserve energy. Some trees may use the dead leaves to protect them from grazing by larger animals or freezing winter frost.

In this way, the leaves of marcescent trees hang on to the tree for the winter, and the new growth dislodges them.

Some species of trees exhibit marcescence in their early stages. They lose their leaves as they mature, while others retain them up to a certain height and canopy.

While no one is certain of the reasons for this, scientists aren’t sure which is the most common reason for this characteristic. There are a few theories, though.

There are trees around that have refused to drop all their leaves, and I don’t mean evergreens. The leaves have turned brown on many deciduous trees, but they’re still stuck to the tree, shivering in icy winds.

Instead of bare silhouettes on the skyline, a good number still have their foliage, which looks odd when all the neighboring trees are bare.

It’s particularly evident this fall with oaks. There are many around sporting a rich, brown cloak. If this was midsummer, we’d assume they were sick and consider a call to an arborist.

The leaves will fall eventually, though perhaps not even until spring. This unusual retention of leaves is due to something called marcescence.

It’s a word that sounds vaguely like the name of a new, seductive fragrance or found in the description of an overhyped wine.

But no, it’s simply the term that refers to the retention of dead plant parts: leaves that refuse to detach.

At the base of the petiole (the stem part of the leaf where it attaches to the twig) is the standard point of separation. It’s called the abscission zone and develops in fall after the sap supply is turned off.

The zone is cleverly designed with weak cells on the top layer and cells on the bottom that expands, breaking the weaker ones above, and allowing the leaf to be shed.

It’s familiar with beech trees, hornbeam, and oak. On pin oaks, the abscission zone doesn’t even form until spring, so the leaves tend to stay on the tree until it does form, then detachment takes place.

The intent of the leaves may be to stick around all winter, but strong winds, an early freeze, or heavy, wet snow can set them free.

The big question is why marcescence occurs in the first place. What is the point of keeping all those dead leaves all winter?

Ecologists are undecided. One belief is that large herbivores such as moose and deer won’t eat their preferred twigs with nutritious buds when leaves are stuck all over them.

I wouldn’t have thought they were so fussy. I supposed it’s akin to getting a hair in one’s mouth. And besides, that doesn’t account for leaves higher than a moose on its hind legs.

Another theory is that the trees keep their leaves because if they’re growing on sandy or infertile soil, it’s advantageous to postpone the leaf drop.

After the leaves reach the forest floor in spring, they break down, releasing nutrients just when the tree can best use them – like a layer of fresh compost.

Oak leaves are known to break down slowly, and there’s a theory that they may become degraded by sunlight by staying aloft, perhaps speeding their eventual decomposition.

Yet one more suggestion is marcescence allows the leaves to stay on the tree and trap snow, stockpiling moisture that will be released when the snow melts in spring, just as the tree is awakening.

The difficulty for researchers is that marcescence occurs in various species, including tropical ones.

It may be some time before we know why leaves aren’t falling as expected, so we may enjoy the extra bit of muted color in the landscape for a while longer.