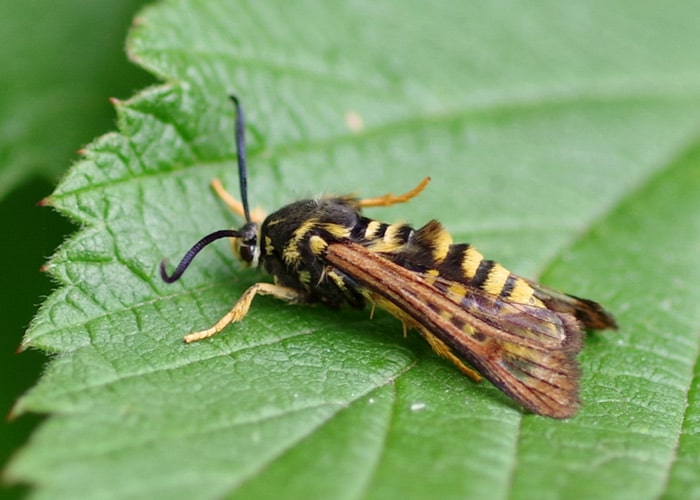 It is a common cane-boring insect pest of raspberry in northern Utah.

Although its host range includes all brambles in the genus Rubus, it is only known to cause damage to raspberry in Utah.

Larvae tunnel in the lower cane, crown, and upper roots of raspberry, causing entire canes to wilt and break off at the crown.

Adult raspberry crown borers are fascinating black and yellow moths, 10 to 15mm (3/8 to 5/8 inch) in length.

In individual specimens, the yellow color is rather blazing, while at the same time, in others, it is close to white.

They resemble a yellow jacket and are aerial during daylight.

Albeit the name sounds similar to raspberry cane borer, the cane borer is a beetle.

In general, crown borer does not seem overly present as a pest in some areas, but occasionally sites can be heavily attacked.

There are ways to rid your raspberry patch (or containers) of this pest. But, unfortunately, it can take up to two years of permanent treatment to completely break the pest’s life cycle.

Insecticides containing pyrethrins are considered to be the most effective.

Apply the solution directly to the plant’s crown early in the spring and fall after harvesting.

This will kill the larva heading down the canes to bore into the peak for the winter.

Insecticides targeted directly at the crown and base of the canes in fall and early spring before the larvae tunnel have an excellent success rate.

If the infestation is beyond control, dig up, discard the plant in the garbage, or burn it.

Wasps and bees, of course, are armed with a stinger that is used to ward off potential predators.

They advertise their painful defense with a bright and distinctive color pattern. This allows animals who have experienced their defense to learn who they are and avoid future lessons quickly.

“Once bitten, twice shy” is a common theme in Nature. But this system of “show
and tell” is exploited by several enterprising harmless insects that are colored just like a stinging insect.

So why bear this guise when they are harmless? They do so because they gain protection. Any predator with a previous nasty experience with one of the real McCoys will also avoid one of the harmless look-alikes.

This remarkable phenomenon is known as ‘Batesian Mimicry,’ named after its discoverer, the English entomologist Henry Bates.

Yellowjacket wasps. Flower Beetles look like Bumble Bees. But of all the groups that contain “dishonest” members, none exceed the Flower Flies for ingenuity and complexity of disguise.

Many Flower Flies (aka Syrphids) look just like wasps, bees, or hornets. Some enhance their deception by creating buzzing sounds.

As adults, Flower Flies eat pollen and nectar, but as larvae, many eat other insects, with aphids being a favorite food.

But it is the adult flies that have attracted the attention of entomologists and insect photographers worldwide. Their more than 6,000 species offer myriad colors and forms to admire and record.

Novices have a hard time telling Flower Flies from their armed models. One way is to examine the antennae; bees and wasps bear thread-like structures, while Flower Flies is pita-shaped with a protruding filament.

Another method is to count the wings: flies have two while stinging insects have four (but beware, many Flower Flies have bi-colored wings to give the impression of owning four).

If still unsure, you can catch one in your hand. You will soon learn whether you have a mimic or its model!

If you find this article interesting, please share it with your friends. Thank you. 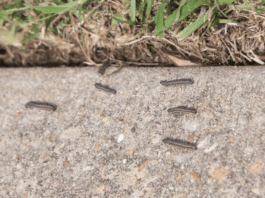 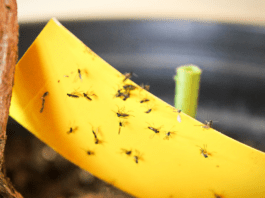 How To Get Rid Of Houseplant Gnats: 4 Ways To Clear... 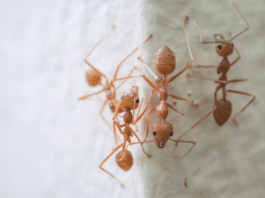 12 Natural Ways To Get Rid Of Plant Ants From Your...