Many gardeners appreciate ground covers as practical alternatives to turfgrass. Used under
trees and shrubs, ground covers eliminate the tedious necessity of mowing and trimming grass around and under these plants. 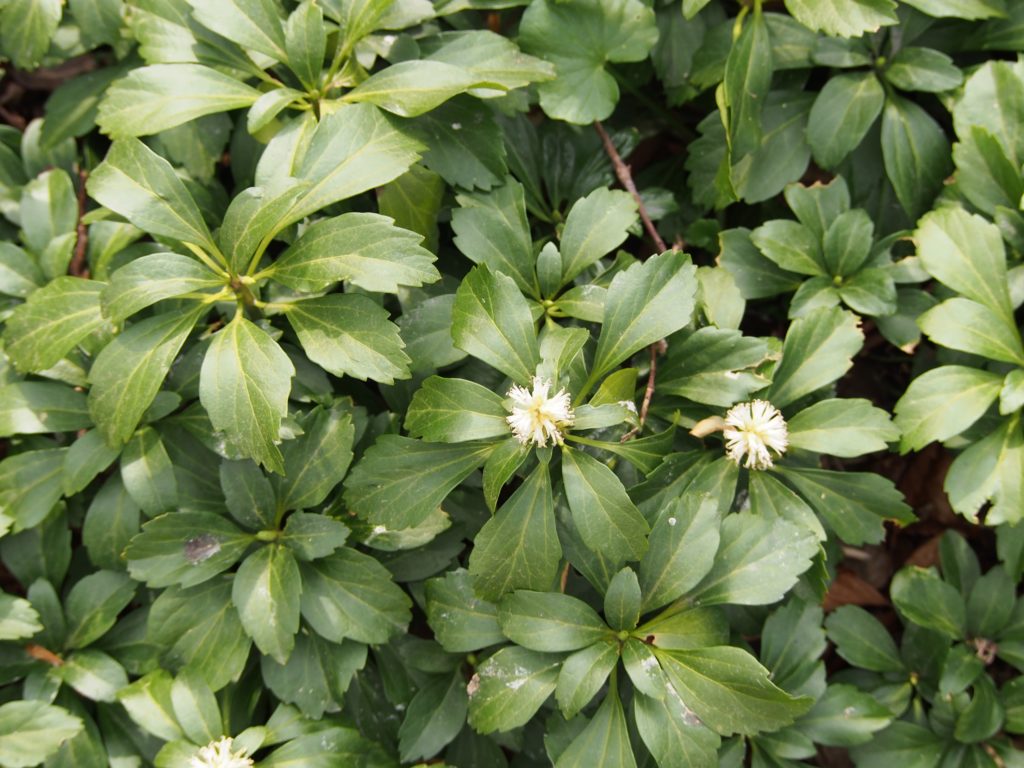 Trees and shrubs can also benefit from shallow-rooted ground covers that break up the soil and increase porosity and organic content.

In this article, we intend to share our research experiences with one of the popular ground covers.

It is native to Japan and is hardy in USDA zones 4 to 8. The shiny, dark, evergreen leaves are grouped in whorls at the ends of stems.

In the landscape, pachysandra can be used on a moderate to large scale under trees, around shrubs, near walkways, and around building foundations.

While the plants are grown mainly for their foliage, the male flowers are pleasantly fragrant
and spike-like, giving rise to the generic name pachysandra, which comes from the Greek
pachys (thick) and andros (masculine) in reference to the thick stamens.

The second part of the Latin name, terminalis, implies that the flowers are borne
terminally (at the ends of the stems).

In our research at Michigan State University, we have studied pachysandra’s response to photoperiod, cold treatment, and growing temperature.

The following results are related to rapid production and propagation for pachysandra.

Many growers obtain vegetative cuttings from outdoor beds during the summer. These cuttings are removed from plants that have overwintered and developed new shoots under the increasingly long and warm days of spring and summer.

The advantage of taking these cuttings is that they are relatively cheap to obtain. The disadvantage is that cuttings are propagated during the summer for a crop that will not
be sold for perhaps 10 or 11 months.

One alternative is to produce cuttings from stock plants that allow propagation to occur closer to the selling date.]

At these growing temperatures, cuttings can be taken from stock plants approximately
every seven to eight weeks.

Our experience is that cuttings from the first flush will be largest, and cuttings from subsequent flushes become smaller to the point where stock plants should be rejuvenated
following the third flush.

We have limited experience in rejuvenation techniques but believe plants should be grown for six to eight weeks under natural photoperiods for bulking and recovery before another
six-week cold treatment.

Pachysandra can be propagated by division or cuttings. Cuttings are relatively slow to root, often taking four to five weeks to root sufficiently enough to be removed from propagation, even under ideal propagation conditions (e.g., media temperatures of 77°F [25°C]).

Under cooler media temperatures, cuttings can take much longer to root. Although stock plants should be grown under long photoperiods (14 hours), cuttings can be rooted under
any photoperiod.

Four weeks after cuttings were stuck, we observed no difference in rooting (length or number) when propagated under photoperiods ranging from 11 to 15 hours.

In a separate experiment, rooting was not influenced by cutting age or size. Dipping the base of unrooted cuttings into a 2,000 ppm IBA solution promoted rooting, but IBA at 10,000 ppm reduced rooting percentage.

Therefore, we recommend taking cuttings from plants grown under long days, quick-dipping the base of stems into a 2,000 ppm solution of IBA, then rooting cuttings in a
mist or fog house for approximately five weeks.

We obtained plants in mid-September and grew them under various photoperiods either without or following a 10-week cold treatment at 41°F (5°C).

Without cold, plants grew slowly under photoperiods less than 14 hours, and plants under the 10- hour photoperiod were essentially dormant.

New shoots emerged and developed from plants grown under photoperiods of 14 hours or longer.

In contrast, new shoots developed from lateral or underground runners when plants were grown under other photoperiods.

The time for shoots to elongate was not influenced by photoperiod. When we removed these newly flushed cuttings for propagation, plants produced multiple lateral shoots, irrespective of photoperiod.

The growth of these new lateral shoots was more rapid, and the newly formed shoots were longer when plants were grown under long photoperiods (14 hours).

Lateral shoots that developed from plants under photoperiods of 13 hours or less were
short (one to 1.4 inches), and development was slow.

Therefore, our experiments indicate that pachysandra’s vegetative development is promoted by long days, and under short daylengths, plants can become dormant.

Plant dormancy can be overcome by exposing plants to cold temperatures for at least six weeks.

Pachysandra growth is more rapid as temperature increases. But leaves became chlorotic when plants were grown under temperatures greater than 80°F.