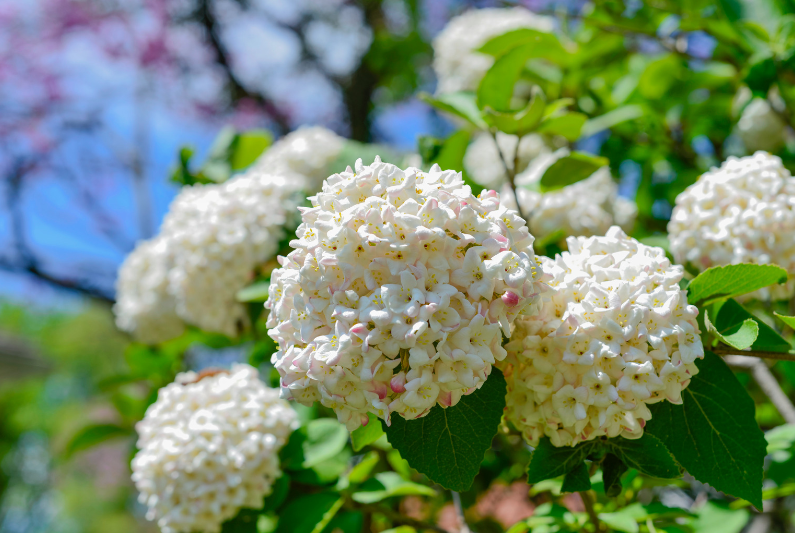 I have had mine for about a dozen years, and each year it is in full glory, starting chartreuse and turning white as the flowers mature.

Viburnum is a large and diverse group of shrubs and small trees.

According to most sources, there are about 180 species that come from North and South America, Europe, Asia, and North Africa.

They can be deciduous or evergreen, and many have beautifully scented flowers.

The height of viburnums ranges from 2 feet to 30 feet. Their flowers can be significant and showy, lace cap, or scented.

The flowers are usually white, but some do have a pinkish tint. While some are known for their flowers, others for their fall display of berries.

While most viburnums are deciduous, some are semi-evergreen, and others are evergreen.

This plant was bred to be easy to care for, fragrant, and attractive. You should dig twice as wide a shallow and broad hole as the root ball.

Fill the hole with the removed soil, leaving the root crown about 2 inches above the soil level.

The newly planted bush should be watered and mulched about four inches deep.

Snowball bush viburnum grows relatively large, so keep that in mind when choosing a location.

The bush should be planted in a location that gets plenty of sunlight and allows it to grow to its full size.

The shrub will be very easy to maintain once established – it only needs to be fertilized once a year, and pruning is unnecessary.

Unlike some viburnums, snowball bush viburnum is not considered invasive in many regions.

However, ensure you are growing this hybrid, not Japanese snowball (Viburnum plicatum), an invasive shrub that looks similar.

It is impossible for the seeds of this hybrid shrub to reproduce themselves accurately. As a result, softwood cutting is always used for propagation.

A thick layer of mulch may be needed under zones 6 and 7, but this shrub requires no special winter protection in zones 7 and 8.

Occasionally, you may need to treat this shrub for disease or insect infestations, but you can take preventive measures.

If you want to reduce the chances of bacterial leaf spots or powdery mildew attacking your snowball bush, leave space between it and other plants.

Snowball bush leaves may also be infested with aphids; spray the bush with a neem oil-based organic insecticide if you notice them.

Once bacterial leaf spot diseases have established themselves, viburnums are hard to manage. It is usually necessary to remove plants that are badly affected.

How to Get Snowball Bush Viburnum to Bloom

To bloom, these shrubs need cross-pollination. Adding one or two more snowball bush viburnums in the area may help if yours does not bloom profusely. This is why many landscapers plant this shrub in groups.

Shade can also reduce flowering. It is possible to open up sunlight by pruning nearby trees. Improper pruning is another major cause of non-flowering.

If you prune a viburnum too early in the spring or too late in the fall, you will eliminate the possibility of blooms in the spring.

It is always a good idea to prune this shrub as soon as it has flowered. By doing this, the shrub will have plenty of time to develop the wood that will produce flowers next year.

Since nitrogen fuels and foliage grow at the expense of flowers, viburnums receiving a lot of nitrogen fertilizer, such as runoff from lawn feeding, may experience reduced flowering. It may be helpful to change to a product with more phosphate in the feeding routine.

There are several reasons why viburnums are so popular, including the fact that they are so easy to grow. However, snowball bush viburnums should be watched out for.

Powdery mildew is an unattractive but rarely fatal fungal disease.

Keeping the shrubs well ventilated and watering them at ground level rather than overhead can help prevent the disease.

Whenever diseased leaves appear, remove them and do not add them to compost heaps.

To avoid the spores overwintering and reinfecting the plants in the spring, clean up the debris around the plant at the end of the season and discard it.

Fungicides are sometimes effective when sprayed as soon as the fungus appears. Powdery mildew often appears late in the season, and most gardeners don’t bother treating it.

If such diseases are present, remove the affected parts of the plant carefully, and sterilize pruning tools between cuts.

Plants that are badly affected by bacterial diseases should be removed because there is no effective cure for them.

Since some viburnums have puffy snowball-like blooms, it’s essential to distinguish them from the more civilized Viburnum x carlcephalum.

On the upper surface of the leaves, the Japanese snowball (V. plicatum) has a pleated texture (V x carlcephalum has smooth leaves).

When planted in a prominent location, this shrub makes an excellent specimen for landscaping. The plant is commonly used as a shrub border, a screen, or a hedge.

Hybridization of the snowball bush viburnum was carried out by Albert Burkwood in England around 1932.

The hybrid combines the beautiful scent of Viburnum carlesii with the large flowers of Viburnum macrocephalum.